The University of Nottingham’s 6C model of Open Educational Resource Publication (OER). The 6C model (Figure 1) was first used at Nottingham in 2009 as part of the Jisc funded BERLiN project. The project manager for that project was Andy Beggan, and it was Andy who defined the 6C model to formalise the process that Nottingham used to create and publish Open Educational Resources (OER). The model remains in use at Nottingham as part of the OER publication model, and was adapted for use as part of the Jisc Collections funded ROMe project to publish Nottingham’s e-textbooks. The model would be easily adaptable to other institutions and other online content creation contexts, and has served Nottingham well over the years. 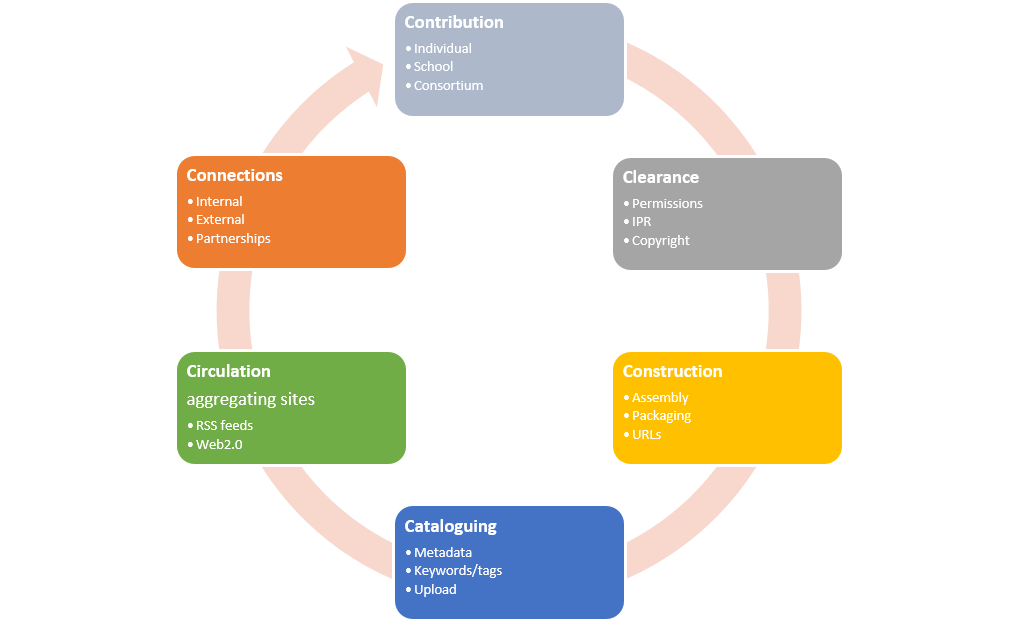 This phase of the model involves setting up processes to receive content into the team that will carry out the clearance and construction phases. For the institutions as e-textbook publisher project, the Department of Philosophy and Nottingham University Business School provided their manuscript content and supporting images to the Learning Technology Team. The Applied Ethics book was contributed as a word file which was text only. The Corporate Social Responsibility in Practice (CSRP) book was contributed as multiple word files, with supporting media and instructions for how to build the book.

Construction
There are many approaches that can be taken in the construction phase. For the Applied Ethics etextbook multiple versions of the e-textbook were created, some for distribution through the Smashwords website which allows readers to download e-textbooks in multiple formats; and one for distribution through the Apple iBook store which would contain many images and some interactive elements. The three main formats used were: iBook, Mobi, and Epub.
The content creation of the Corporate Responsibility Sustainability in Practice e-textbook somewhat followed the content creation and publication plan set out in the funding proposal submitted to Jisc. A plain text version of the e-textbook was authored by the academic team and passed to the Learning Technology team to construct the e-textbook. A number of videos, audio and interactive elements were also created by the academic team, and a number of third party sites and services were also suggested. The creation of the content was completed over a longer time period than originally planned and a number of different authors were allocated sections to work on.

Cataloguing
The upload and metadata cataloguing was completed by the Learning Technology team. For the Applied Ethics book we were using third party sites and therefore. We did not consider following any specific metadata schema outside what was being asked for by the sites we were using to publish to. This is different to how our OER publication process works where we have taking the advice of the University’s metadata and cataloguing team to define the schema.
For the CRSP book we included some limited metadata available in Xerte.

Circulation
For the Applied Ethics e-textbook the circulation phase of the process was straightforward as the Learning Technology team were able to harness the distribution processes offered by both the Smashwords website and the Apple iBook store. These established platforms have clear paths to established markets.

For the CRSP e-textbook circulation was more difficult. Xerte does not have the same route to market as the established e-book platforms and therefore all work on circulation was and must be driven by the project team and particularly the academic team. This has been successful with over 6000 views of the material.

We use cookies on our website to give you the most relevant experience by remembering your preferences and repeat visits. By clicking “Accept All”, you consent to the use of ALL the cookies. However, you may visit "Cookie Settings" to provide a controlled consent.
Cookie SettingsAccept All
Manage consent

This website uses cookies to improve your experience while you navigate through the website. Out of these, the cookies that are categorized as necessary are stored on your browser as they are essential for the working of basic functionalities of the website. We also use third-party cookies that help us analyze and understand how you use this website. These cookies will be stored in your browser only with your consent. You also have the option to opt-out of these cookies. But opting out of some of these cookies may affect your browsing experience.
Necessary Always Enabled
Necessary cookies are absolutely essential for the website to function properly. This category only includes cookies that ensures basic functionalities and security features of the website. These cookies do not store any personal information.
Non-necessary
Any cookies that may not be particularly necessary for the website to function and is used specifically to collect user personal data via analytics, ads, other embedded contents are termed as non-necessary cookies. It is mandatory to procure user consent prior to running these cookies on your website.
SAVE & ACCEPT